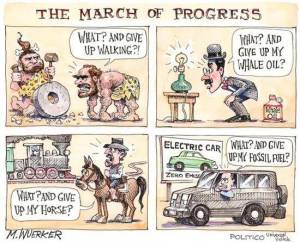 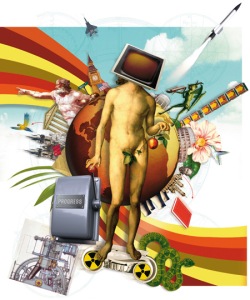 The Idea of Progress

The Idea of Progress is the theory that the different advances in technology, science, and social organization can produce an improvement in the human condition. That is, people can become happier in terms of quality of life (social progress) through economic development (modernization), and the application of science and technology (scientific progress).

Progress implies change and evolution  and throughout history most of the advances have been positive. However the rhythm of progress seems to have accelerated over the last few decades and  the technological breakthroughs and scientific developments are causing  some people to question this progress. What effect do these « advances » have on our society? Do they always have a positive effect on the way we live?

Do certain new technologies bring people closer together or do they alienate us?  What effect does this progress have on our culture?

– Medical advances:  cures for illnesses such as AIDS and certain cancers

– Advances in global communications networks facilitating the exchange of information

– The internet – advantages and disadvantages (have we become to dependent on technology, is it isolating us from one another?)

–  Women’s rights :  obtaining the vote for women, the fight for equality, equal pay

What are the ethical, social and environmental consequences of these developments? What effect do they have on our modern-day world?