How much is today’s British cuisine influenced by its multicultural population?

We have all heard about the traditional British dishes such as fish and chips, roast beef and yorkshire pudding, roast lamb and mint sauce, bacon and eggs, but British cuisine is changing. If you walk round London you will be amazed by the amount of foreign restaurants – thai, japanese, italian, chinese, indian…

Thank to globalisation traditional British cuisine is being reinvented and new dishes are appearing on menus.

Watch this video to find out more about it: Video

There are also exercises that you can download or try online.

Idea for « Spaces and exchanges »

This topic could be used to illustrate the notion of spaces and exchanges. Think about how the way we eat today is influenced by globalization – what are the advantages and disadvantages of this?

On a positive side, food is more interesting, more colourful, tastier, more inventive than before, we take an interest in other cultures and there are more and more foreign products are available in supermarkets.

However globalization may be responsible for today’s bad eating habits – the boom of fast food and problems of obesity. It can also cause a problem for the environment due to the fact that more and more products are imported and flown across the world. A demand is created for products that we don’t necessarily need! 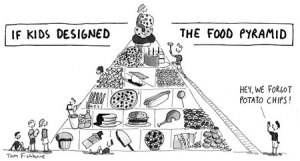