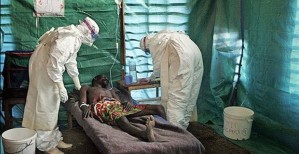 The Ebola outbreak is currently in the news and even more so now that several cases have been detected in the USA.

What exactly is Ebola? Is there a cure to this deadly disease? How can countries work together to reduce the risk of the disease spreading?

Ebola – or Ebola haemorrhagic fever (EHF) – is a really deadly virus: 50% to 90% of people who catch it die from it. But there are a few forms of the virus which have been identified by scientists and given the right medical care and treatment, you can recover. Ebola was first spotted in the African countries of Sudan and the Democratic Republic of the Congo in 1976. In the space of five months in that year, 284 people in Sudan caught the virus. It killed 117 of them.

You can catch it through direct contact with the body fluids of an infected person such as blood and saliva. It is not airborne like the flu so is more difficult to catch but is very infectious: so infected people have to be kept separate to reduce the risk of it spreading. Healthcare workers who have looked after sick patients have also been infected.

For the moment there is no known cure however a new experimental drug, ZMapp, has been used in the US on health workers and a UK nurse who caught the disease in Africa. They recovered from the virus.

The World Health Organization warns greater global efforts are needed to combat the Ebola virus, which is spreading ever faster in West Africa despite efforts to contain it. Barack Obama and EU leaders took part in a videoconference on Wednesday 15th October to discuss the growing Ebola crisis following warnings that the outbreak could grow to 10,000 new cases a week within two months. They discussed what further action can be taken to help stop the spread of the virus in west Africa and how passengers arriving from Africa can be screened to prevent the disease spreading further.

Here are a few videos that explain more about this outbreak.

An interactive video : Ebola – the virus posing a deadly threat to millions

Progress towards a vaccine : video

Ideas for a debate about compulsory vaccinations